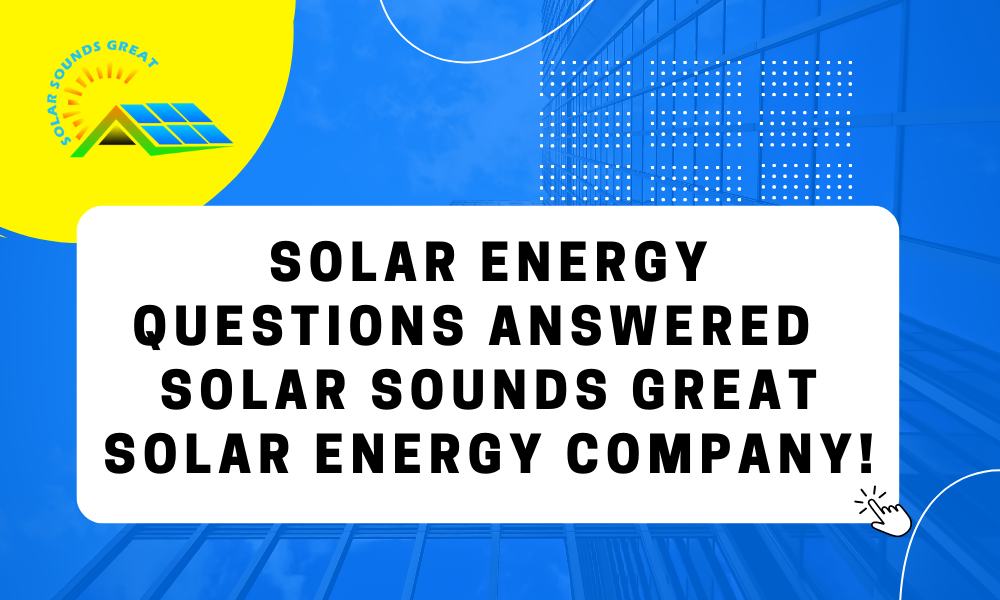 Note: please Watch the video above, this transcription is mostly for the search engines, but you’re welcome to read 😉

This is Tim Blair with Solar Sounds Great and I’m here to tell you why solar sounds great!With solar energy, it’s really the difference for your house of owning your energy vs renting it. Think about when you bought your house, you have a mortgage, your mortgage is locked in, you have the same payment for X amount of years. It’s very similar to owning vs renting for your energy. With the electric bill that you pay, you’re renting. You’re just giving away money and it’s gonna go up. The rental rates in the rental market may eventually come down some day, but your electric bill never will.The Texas grid is really suffering right now, there are a lot of people moving here and the more people moving here, the more issues the grid has, the more maintenance the grid needs, the more rates need to go up to be able to support these issues. If you bought your house 5 or 10 years ago,  you didn’t hesitate to call the electric company and set that up, so you set up your electric bill, you know you’re going to be paying it every month. But if you have been given the option 5 or 10 years ago to make a different call and call to set up a system that produces solar energy on your roof and you own it after paying for your solar loan over the course of a few years, a loan that’s locked in vs an energy rate that’s going up every year, it could be a huge difference, you could have owned it by now. With some of our plans you could own your solar energy system in 5 to 10 years. Some loans are longer than others, but with our referral program, you could be paying your loan off very early.The way we set up solar energy nowadays is it’s no money down, so you’re basically making a payment that’s less than your electric bill and then many times not even having an electric bill. Now, different electric companies have different rules (that you can see on their websites) . You need a solar provider that can dig deep into these rules and policies and help you truly understand them.
So we set you up with no money down, you have a tax credit of 26% which is a federal tax credit. We provide you a form that you can give to your accountant that can help you take that tax credit and apply it to your loan, you have up to 5 years to apply that money to your solar energy loan.
Solar Sounds Great is a representative of the Powur network. The powur platform is the biggest network in the united states right now, we’re in 24 states and we provide things that so many other solar energy companies cannot provide. Our finance companies are currently offering rebates that are 12 to 36 months of solar energy payments that you get a check for right after the solar panels install.  If you have the right credit, the finance rates can go down to 0% depending on various factors. One of the great things about the powur network is we have access to so many finance companies that some other solar energy companies may not have access to. The other advantage we have is different panels to choose from. We only use high quality American panels, they’re slick, they’re modern, they’re black they look great on your roof. We also have better solar insurance. We don’t just have warranties on our products. We have Solar Insure that’s 30 years: The panels will produce at least 92% of what the original plan was over the course of 30 years. So in the 29th year, if your system is producing less than 92%, then the parts and the labor that you need to get that fixed is all covered. There is no deductible either.
Let’s talk about selling your home. Listen, if you’re going to sell your home in the next 2-3 week then there’s no need to get solar. But if you’re going to sell your home in even a few years down the line, it’s already gonna be at a rate that’s going to help you. Solar homes sell for 10- 15% more than other homes. The insurance is absolutely transferable too.
With the new solar panels and new technology that makes them so efficient, it’s just a no-brainer to produce your own energy from your own roof instead of renting it from the electric companies.
There used to be where there were multiple cells in the solar panels and people worried about one of the cells going out and the whole panel going out, it’s not the case anymore. We have micro inverters behind all the cells now so if a bird is dropping on one cell, or there’s a shadow going on one, it’s not gonna affect the whole system. The system is still gonna work.
Some people ask about hail being in Texas. I’ve done roofing for quite a while and have done lots of roofs. First, our panels say that they will withstand a golf ball shot at 90 miles per hour dropped directly flat on that panel, the panel will survive that. Second, everything is insured anyways, but I will say that I’ve done a lot of roofs with solar energy panels and even in west Frisco where we just did a lot of roofs over there, windows were broken, but solar panels were intact. They just came off the house, we replaced the roof and put the solar panels right back on.
That’s most of the questions I get here recently. Again, you’re owning vs renting, no down payment, 0% financing depending on your credit, American made, nationwide company that’s really gonna take care of you and knows all about the solar policies, etc.. It just makes sense nowadays to go solar.

Let's get in touch

Give us a call or fill in the form below and we will contact you. We endeavor to answer all inquiries within 24 hours on business days.
View us on google maps
972.658.2292
tim@solarsoundsgreat.com